Warning: For those of you who come here looking for technical advice and inside information about the Selenium project, WebDriver, or browser automation, this post isn’t about any of those. You might just want to skip this one altogether.

One thing about me I’m not really sure how many people are aware of is that I’m polyamorous. That means that I am comfortable being in simultaneous romantic relationships with multiple partners at once, and that my participation in those relationships is openly known by all people involved. I’ve been polyamorous, or “poly” for short, for nearly all of my adult life. A little over 20 years ago, I lived in the Pacific Northwest, and for the first time in my life, I experienced first-hand the struggles and celebrations of what is now known as the LGBT community. One thing that struck me was the imagery and symbolism those communities used to rally around, identify other members, and publicly announce their membership in the community. The pride flag was one image that made a huge impression on me. At that time, the poly community didn’t really have similar symbols to use, so I took it upon myself to create one. Here’s what I made up, and released into the public domain in the late summer or early fall of 1995. 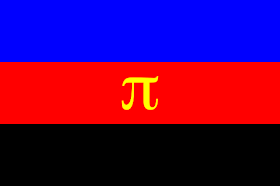 Here’s the text I wrote up describing it to the first mailing list I shared it with. It’s become the canonical description of this particular flag.

The poly pride flag consists of three equal horizontal colored stripes with a symbol in the center of the flag. The colors of the stripes, from top to bottom, are as follows: blue, representing the openness and honesty among all partners with which we conduct our multiple relationships; red, representing love and passion; and black, representing solidarity with those who, though they are open and honest with all participants of their relationships, must hide those relationships from the outside world due to societal pressures. The symbol in the center of the flag is a gold Greek lowercase letter ‘pi’, as the first letter of ‘polyamory’. The letter’s gold color represents the value that we place on the emotional attachment to others, be the relationship friendly or romantic in nature, as opposed to merely primarily physical relationships.

Now, here are some things to understand. Clearly, I’m not a visual artist. My tools for creation at the time were literally limited to Microsoft Paint, running on Windows 3.1. Nevertheless, the flag design managed to limp along, with little fanfare. My friends and I used it, and thought of it as quirky and something that could be used in the way other pride flags were used, as a symbol to rally around and for identification.

Fast forward 20 years. Apparently, this thing called the World Wide Web happened, and let all sorts of people communicate and discover things they’d never known about before. New polyamorous people began to discover the flag existed. One would think that people might think it was an interesting idea, given its intent. One would be wrong. The flag has been called vile, no good, hideous,disappointing, ugly, and many other negative things.

One of the issues frequently brought up is that the color scheme is garish or unpleasing. That’s subjective, and I can’t argue with their perception. I still think there’s value in the color symbology, if not the actual RGB values I used when creating it.

Many people seem to take issue with the pi symbol as obscure. There were specific reasons for choosing it at the time. First, I specifically avoided imagery that included a heart. The leather pride flag, which predates the design of mine, includes a heart, and I was trying to avoid confusion, given that community was there first. The “infinity heart” was not yet as widely accepted a symbol for polyamory, and would have been challenging for me to incorporate given my limited abilities in the visual arts. The letter pi was readily available on computer typographic platforms even in those days, so I chose that.

Also, at the time, I was more concerned with “in the closet” polyfolk, and was far more in the closet myself than I am these days. I wanted a symbol that could be used relatively anonymously, that could let people who were in on the symbology connect, without it being too specific.

Additionally, there was already a rich history of existing pride symbols using Greek letters, the use of lambda as an LGBT symbol, being a concrete example. I was hoping to evoke similarity and solidarity without being too explicit or derivative. Finally, the fact that the “poly” in polyamory is a Greek root seemed to indicate that would be a natural choice. In retrospect, perhaps a lemniscate (“infinity symbol”) would’ve been a better choice, but nobody spoke up then.

Poly people coming to read this full story for the first time, welcome. Glad to meet you. If you don’t care for the flag, I’m sorry to have offended your sensibilities. Today, there are a number of alternative symbols you can rally around. Use mine, don’t use it, I’m just glad some people found a banner to rally around in the late ’90s. Feel free to leave comments, but dismissive and abusive comments will be removed.