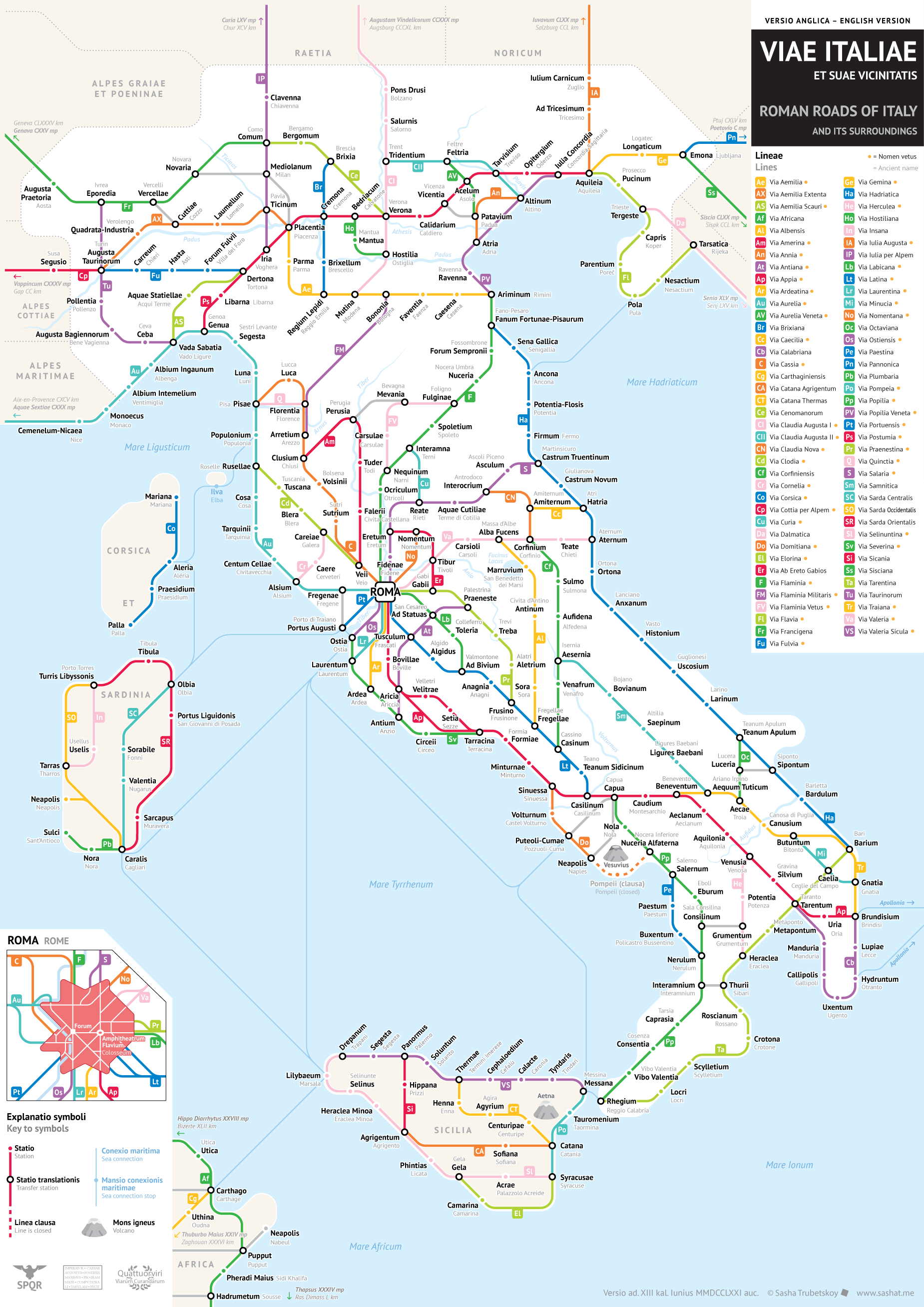 At its peak around the year 117 AD, the mighty Roman Empire owned five million square kilometers of land. It ruled more than 55 million people, between a sixth and a quarter of the population of the entire world. The empire, as classicist and historian Christopher Kelly describes it, “stretched from Hadrian’s Wall in drizzle-soaked northern England to the sun-baked banks of the Euphrates in Syria; from the great Rhine-Danube river system, which snaked across the fertile, flat lands of Europe from the Low Countries to the Black Sea, to the rich plains of the North African coast and the luxuriant gash of the Nile Valley in Egypt.” All that power, of course, originally emanated from Italy.

The builders of the Roman Empire couldn’t have pulled it off without serious infrastructural acumen, including the skill to make concrete that lasts longer than even the modern variety as well as the forcefulness and sheer manpower to lay more than 400,000 kilometers of road.

Not long ago, mapmaker Sasha Trubetskoy took it upon himself to render Rome’s imperial road system in the style of a modern subway map; popular demand put him to work on an aesthetically similar map of Britain’s Roman roads not long after. Now he has turned his skills back toward the land where the Roman Empire all started: above, you can see his “subway map” of the Roman roads of Italy.

“It was fortunate enough that Italy’s Roman roads are quite well-studied and documented, especially when it comes to their actual ancient names,” Trubetskoy writes of this latest project. “This meant that I had to do less artistic interpretation in order to make this look like a sensible, modern chart. That said, there are still some cases where I had to creatively reconstruct certain roads, and I make it clear in the legend which roads those were.” As for the color-coded sidelining of Sicily and Sardinia, “this is a map of Italia (Italy) as the Romans saw it, which did not include those islands. On the other hand, it did include parts of what are today Slovenia and Croatia.”

You can buy a high-resolution version of Trubetskoy’s Viae Italiae et Suae Vicinitatis, or Roman Roads of Italy and Its Surroundings, for $9.00 USD at his site. Printed at poster quality, it could make a suitable gift indeed for any of the cartography enthusiasts, historically minded transit fans, Roman Empire history buffs, or Italian patriots in your life. And in a way, it shows history coming full circle, since much of our sense of how subway maps should look comes from a revolutionary 1972 map of the New York subway system. We’ve featured it before here on Open Culture, alongside an interview with its designer, a certain Massimo Vignelli. And where do you suppose he hailed from?

The Roman Roads of Britain Visualized as a Subway Map

All the Roman Roads of Italy, Visualized as a Modern Subway Map is a post from: Open Culture. Follow us on Facebook, Twitter, and Google Plus, or get our Daily Email. And don’t miss our big collections of Free Online Courses, Free Online Movies, Free eBooks, Free Audio Books, Free Foreign Language Lessons, and MOOCs.

The post All the Roman Roads of Italy, Visualized as a Modern Subway Map appeared first on IACCCE.

The post All the Roman Roads of Italy, Visualized as a Modern Subway Map appeared first on House Of Harmony.